Site categories
Do you make crafts yourself?
home » Different »Collar method of welding the insertion of pipes of different diameters

Collar method of welding the insert of pipes of different diameters

August 11, 2019 Different / Crafts from metal 9 511 0
The easiest way to embed a pipe of small diameter into a pipe is obviously large. To do this, we put the first perpendicular to the second and draw the contour of the smaller pipe on the large surface. We cut out the circle, insert a small pipe into it and scald the insertion point.
If there is a tie-in of two pipes of the same diameter, then on the plunge we perform the so-called. "Pants" - segments that for the most part should have a size three times smaller than the diameter.
Below, we consider the most difficult case in terms of cutting, when the cut-in pipe is slightly smaller in diameter than the main one, for example, 89 mm or 76 mm and 100 mm, respectively. 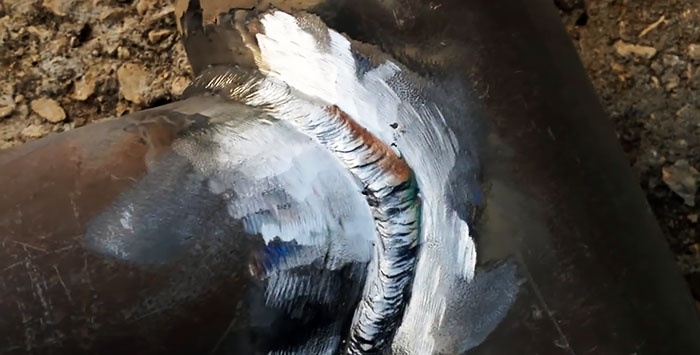 In order to cut and brew an insert of two metal pipes of different diameters, we must have:

We will use the widely used technology of collar tie-in when the edge of a cut-in perpendicular to a round pipe is formed with respect to the main pipe. We will adhere to the following order, implementing this method.
We cut the edge of the welded pipe at a right angle. 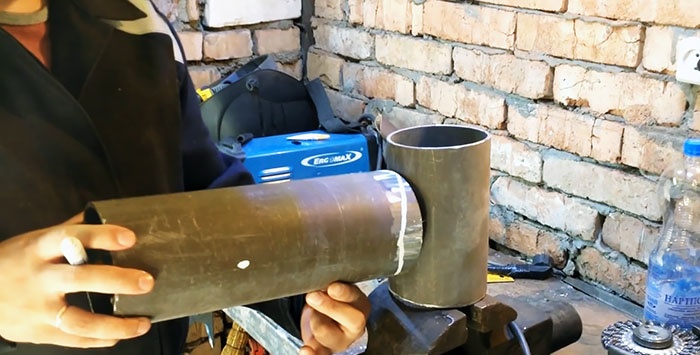 We mark four points on it, which are the intersection points of two mutually perpendicular diameters and the pipe end. If everything is done correctly, then these points are arranged evenly in a circle through 90 degrees. 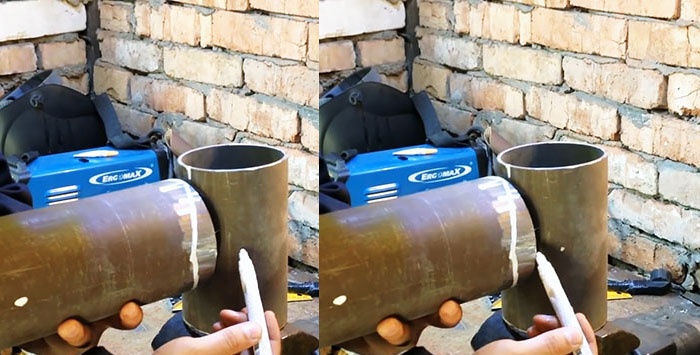 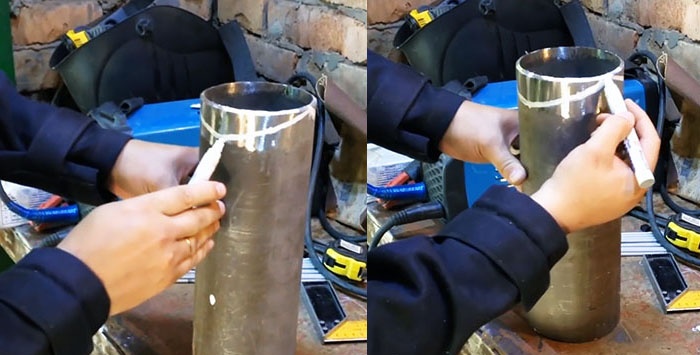 We place the pipe with the marked end to the side surface of the main one and measure with the help of a metal ruler or tape measure the largest gap between the end face of the first and the second generatrix. In our case, it turned out to be equal to 30 mm.
From two opposite points at the ends we lay down along the generatrix of 30 mm. We draw a marker on the side surface of the pipe with two smooth lines emanating from one adjacent point at the end, in opposite directions, so that they pass through the lower marks and converge at the second point on the end.
According to the markup, using a grinder with a cutting disc, cut out fragments in the form of two identical rounded segments. We cut out the curly cuts at the end of the pipe so that there are no burrs or bumps left. 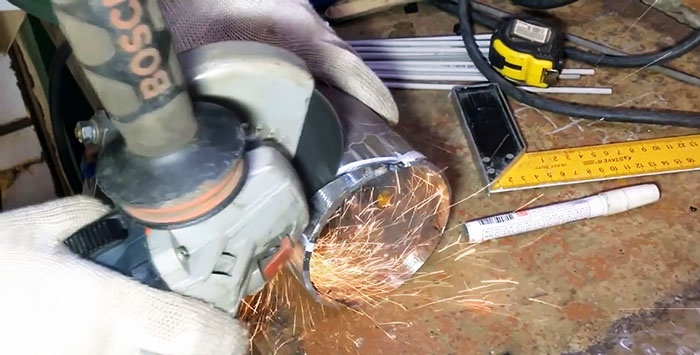 We try on the pipe in place and, if an insufficient fit is found, we correct these places with a grinder and achieve a more exact coincidence of the pipe surfaces. 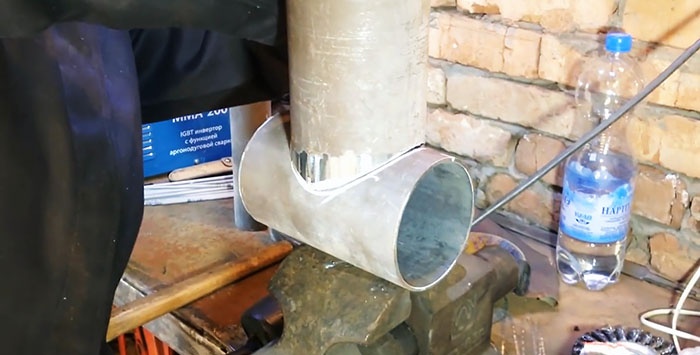 We transfer the external contour of the welded pipe to the side surface of the main one with a marker. Inside the obtained closed line, we build a congruent line, departing from the outer one by the thickness of the pipe wall. It is on the new line that we will produce the cut. 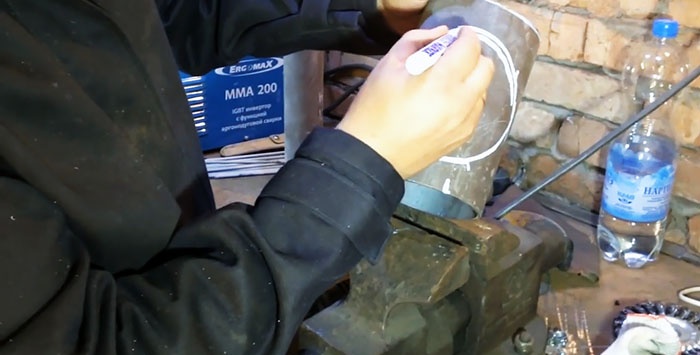 Using a grinder, cut a circle in the pipe according to the marking and process the edges to remove burrs and round the edges for welding. 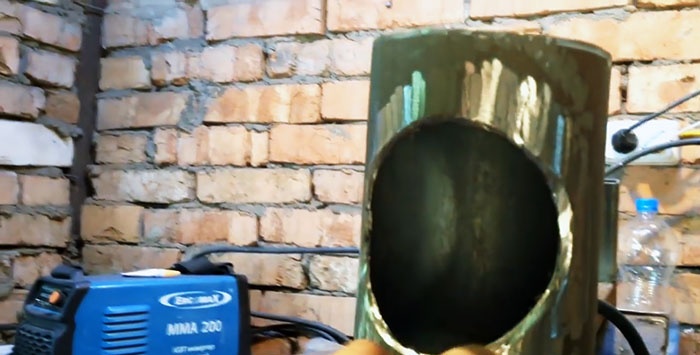 Before starting welding work with a square, we check the perpendicularity of the pipes. The angle between the generators should be 90 degrees. We do oven mitts in two or three places. 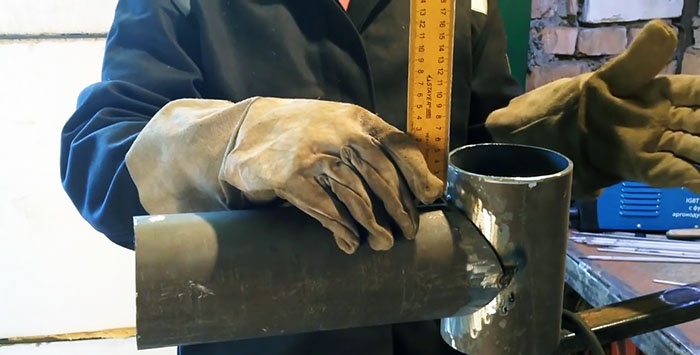 We start welding from the lower point of contact and carry out in two passes with a filament seam: root and facing. In this way we will provide the best quality of the welded joint.
When welding, it is important to choose the right current strength, which depends on the quality of the supplied electricity and, in particular, the voltage. Usually it is about 70-80 A.We cook with a three-millimeter electrode UONI-13-55, trying to ensure that the slag does not fall into the metal.
Having passed from the lower point to the upper, we stop and beat the slag with a hammer. The discovered shortcomings are uncritical, because they can be eliminated in the second pass - facing.
In the same way, we weld the other half of the junction of the surfaces of the pipes. After that, slightly process the first seam, removing large flows and slag. 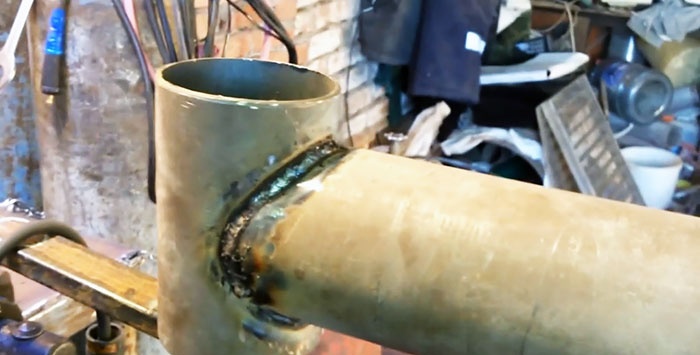 We begin to impose the front seam from the bottom, holding the electrode at an angle of 45 degrees along the way, and moving it transverse to the first seam, or “herringbone”. Next, we cook the seam, holding the electrode almost vertically to the surface, and finish the first half, placing the electrode again at 45 degrees along the way, and making circular motions.
We begin to impose the front seam also from the bottom point and bring it to the top, after which we beat off the slag with a hammer from the seam.
In the same way, we cook the front seam in the second half of the contact of the pipes. As you move up, we slow down the welding speed so that the seam is the same everywhere.
We also beat off the slag and clean the seam with a grinder. The result is a neat and reliable welding seam. 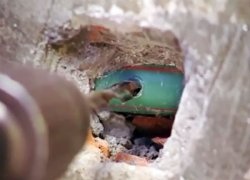 Did you break through the propylene pipe? Two repair technologies

How to easily make an exact cut in a pipe

How to bend in a PVC pipe 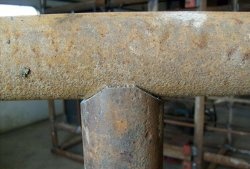 How to make a high-quality saddle pipe for tapping angled 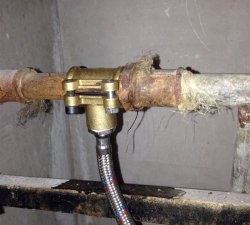 How to make a simple tie-in into a steel pipe 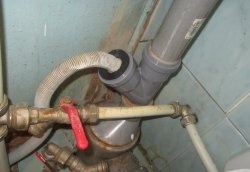 Inserting a washing machine into a PVC riser 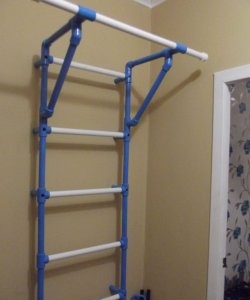 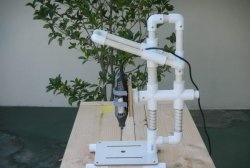 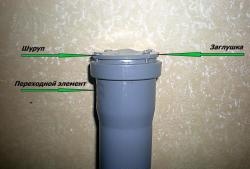