Site categories
How often do you do master classes yourself?
home » Different » Crafts » Crafts from wood »Do-it-yourself deep wood burning 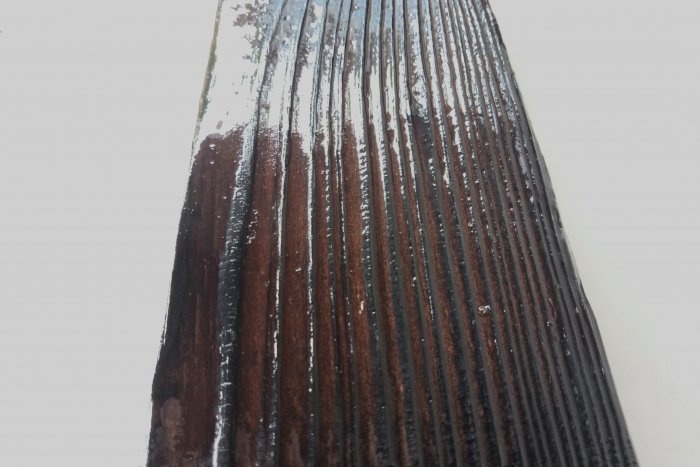 Wood burning is one of the simplest ways to decorate and protect the surface from a number of harmful effects. How to properly perform such an operation at home - step by step is described in the article.

According to one version, it is believed that the Japanese were the first to burn wood. At the same time, they used this technology, oddly enough, not on their products. Initially, in this way they saved the forests from fire during the fire season. The burnt lower part of the trunk became flammable and, accordingly, less exposed to fire.
The second popular legend is also from Japan. If you believe this version, then once the Japanese noticed that after a fire in the forest, charred trunks lasted longer than those that passed the fire. In particular, they noted for themselves that burnt wood does not rot so quickly, and insects do not sharpen it at all.
Later, this technology, prompted to people by nature itself, began to be used in construction. So, before installation, a roofing board, a wall beam, wooden piles were burned. This made the building more durable, protected from insects and, in part, from fire.
Later, firing began to be used for decorating wood products, in particular, for of furnitureoperated outdoors. The goal, in this case, was not only to protect the material from harmful effects, but also to give the surface an attractive appearance.
There is also a version that the Vikings began to burn wood long before the Japanese. They used this technology to process their ships.

The benefits of burnt wood

The advantages of wood treated with open fire are as follows:

In addition, in the process of firing low-quality lumber, almost all defects are eliminated - darkening, blue stain, light rot. The processed product also does not require planing and finishing grinding.

In everyday life, firing of lumber is used everywhere. The technology allows without the use of stains, toners and oils to turn pine into rare wood. In particular, with deep roasting, which is described in this article, the most defective pine easily turns into wenge (grows mainly in Africa).
It is especially useful to use firing in the manufacture of products and structures that will be operated on the street. It can be garden furniture, a fence, a gazebo. Also, wooden elements of housing are often processed by fire - lining, windshields, terraces, balusters of stairs and so on.
The burnt wooden caskets, gift cases, picture frames, grooves and photographs, various coasters and lamps will look beautiful.

What kind of wood can be burned?

Not every wood can be protected and decorated in this way. First of all, this applies to fruit species, oak, ash and alder.However, the most common lumber is perfectly burned - pine and Christmas tree. It is also possible to process veneer and multilayer plywood with fire.
For firing, it is best to choose a material on which a florid structure is visible. During processing, softwood will burn out and be removed, and hard fibers will stand out in a darker color. At the same time, knots, blue stain, fungus and other vices are not a problem for fire.
When firing softwood, it is better to take dried material. It burns much faster, it has less tar, which will subsequently cause certain problems. Raw wood is also quite possible to burn. However, it should be borne in mind that such a treatment partially clogs the pores of the material, and the moisture remaining inside will go out much longer, which is not good.

The main tool in this business is a gas burner. Just an open fire (gas stove, bonfire, etc.) does not fit well, and even burning a large surface will not work. It is also undesirable to use a gas blowtorch. She burns, of course, excellently, but drops of unburned fuel can fly out of her nozzle, leaving glossy spots on the wood. As an alternative, you can try using a building hair dryer. But a lot of time is spent with it, and it is impossible to achieve deep firing.
A gas burner is best suited for this. It costs a penny, safe to use, easy to control and configure. You can even get by with the cheapest option of Chinese production, which together with a can of gas will cost about $ 5. 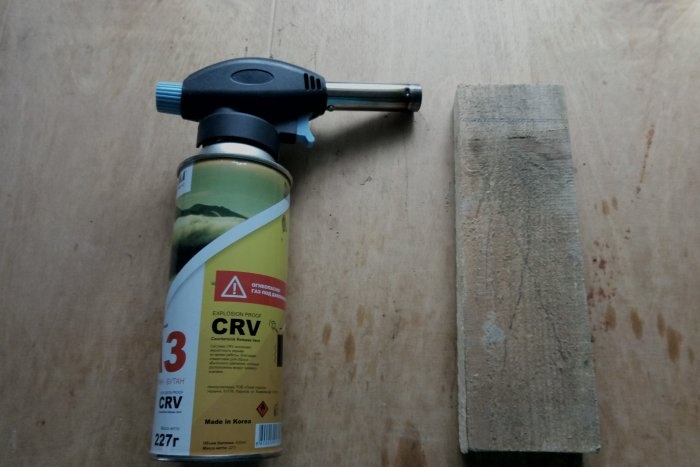 For large-scale work, it is better to acquire a large gas burner, which is designed for laying a bitumen roof.
In addition to the source of directional fire, you will also need felt. In extreme cases, you can take a washcloth from the kitchen to wash the dishes and use its harder side.
In fact, that’s all you need.

Deep firing should begin with a superficial passage of the burner through the material. At this stage, you need to evenly warm the wood, burn out the sticking out pile, and also open the places where the resin is concentrated in large quantities. These areas will need to be given special attention later. 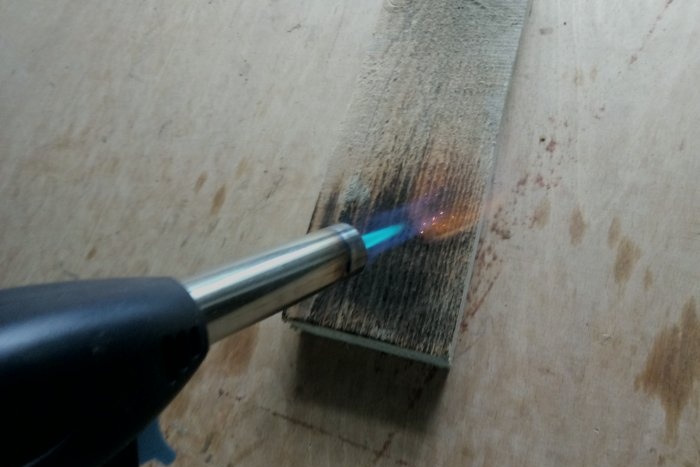 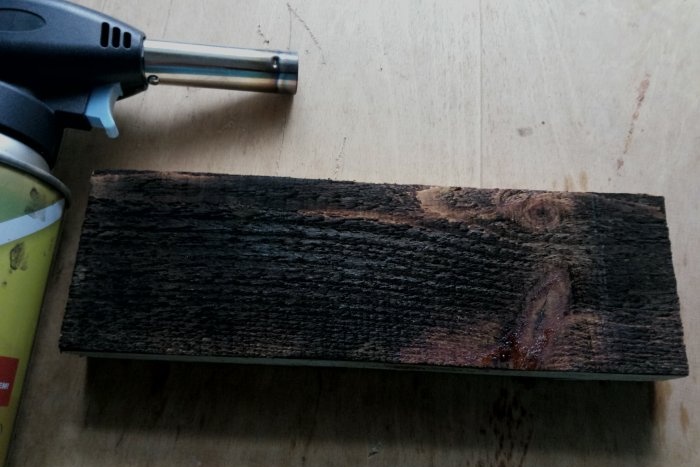 Such places are clearly visible in the photo. As a rule, they appear on knots, and after the first pass they do not darken, but are covered with boiling resin. It is highly flammable and can spoil the whole result, therefore knots should be warmed up carefully. Warmed up, waited until it boils, then again. Repeat until boiling stops. 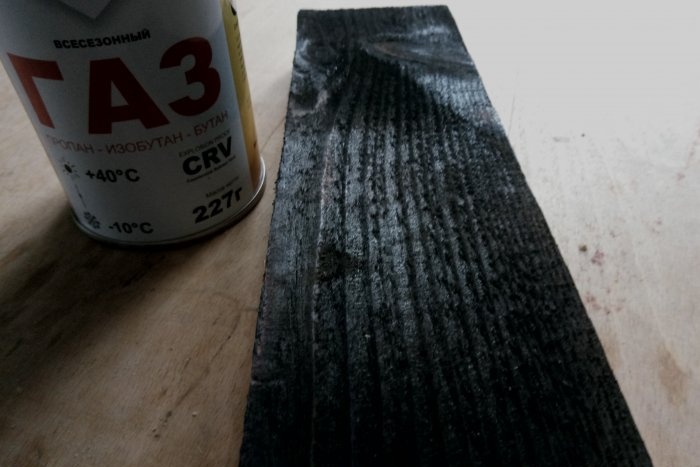 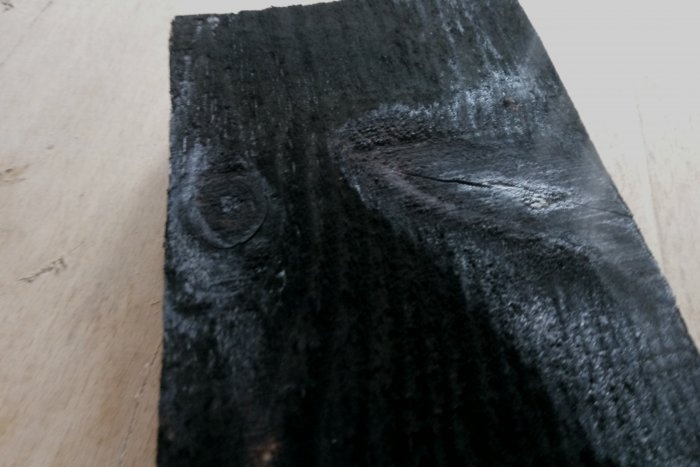 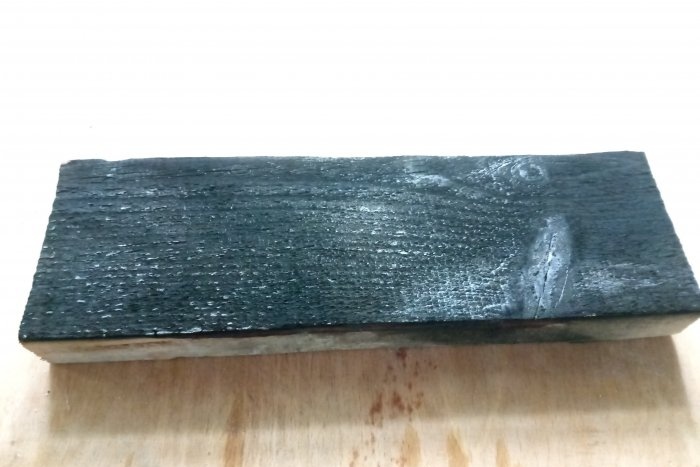 While the resin is boiling and the wood is cooling in these places, the second stage is simultaneously performed - deep firing. The challenge is to make the surface carbonize and crack slightly. The photo below clearly shows how it looks. 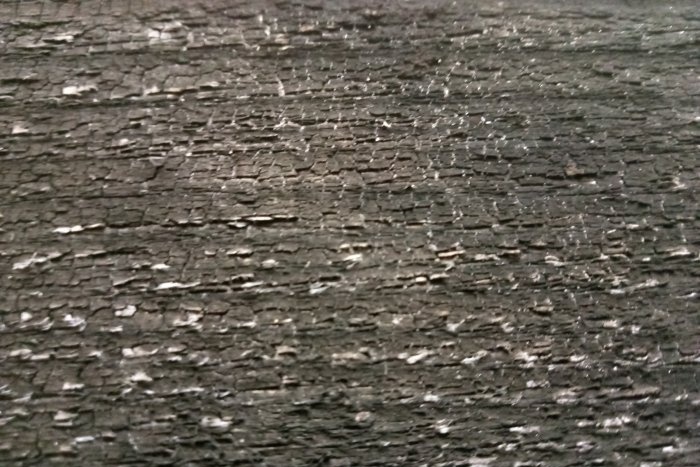 The next step is cleaning the surface of soot. This can be done in several ways: using felt, a soft brush or a special nozzle for the grinder (brush for brushing). The only condition for all cases is to remove soot only in the direction of the wood fibers.
Sandpaper is not suitable for these purposes. It is advisable to use it only for surface firing of wood. In this case, it is necessary to remove all burnt soft fibers, and sandpaper without scratches can not cope with this task. 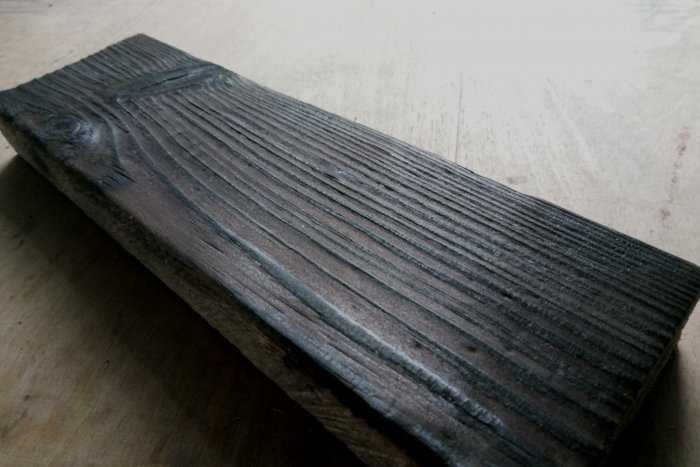 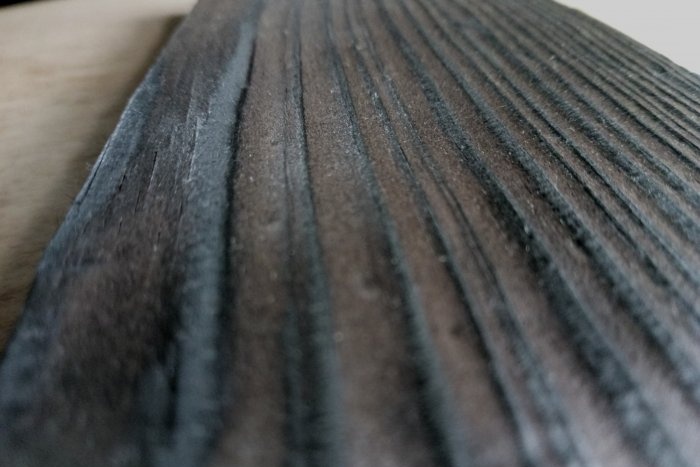 By the way, if you want the result to be lighter than in the above photographs, the surface needs to be brushed longer. But to achieve lighter shades can only be brushed. Felt "get" to light wood does not work.
Some masters wash soot with water, which, in principle, gives a good result. But it should be borne in mind that dry wood in direct contact with water will take a little moisture on itself, which, in turn, can lead to deformations and other problems in the future. A more predictable result is only dry.
After firing, it remains only to cover the wood with a protective composition.To get a silky, dull surface that feels like a clean wood - use special oils. A glossy surface, shimmering under the sun's rays and at different viewing angles from black to light, is obtained after applying several layers of ordinary wood varnish. 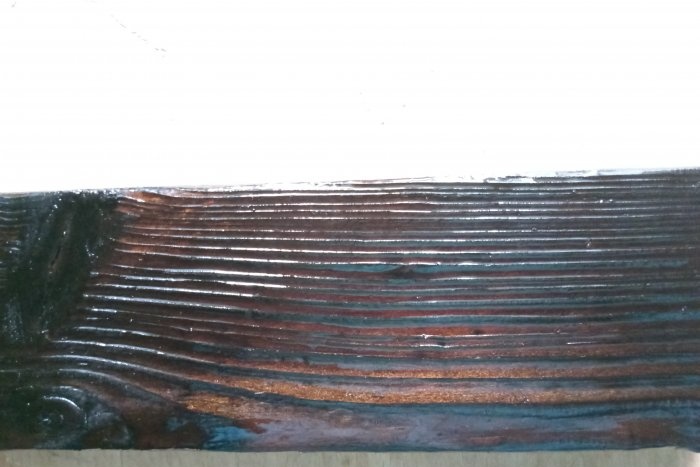 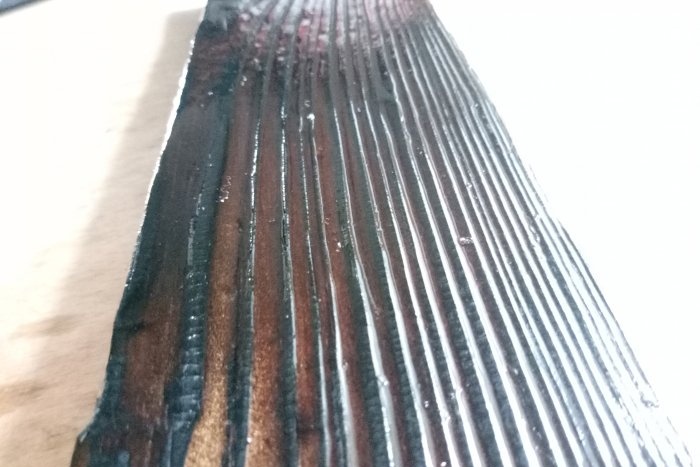 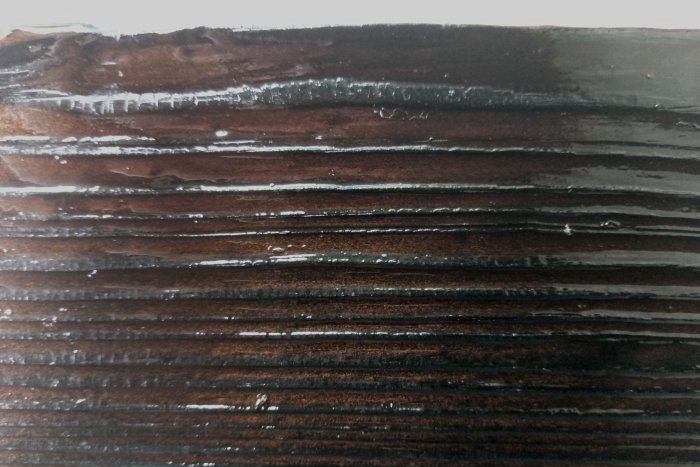 In general, decorating the simplest pine with firing is not a complicated procedure requiring experience, expensive tools and compositions. The main thing is to prevent prolonged burning of wood, completely evaporate the resin, achieve cracking and remove soot only in the direction of the fibers. 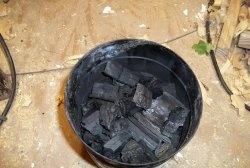 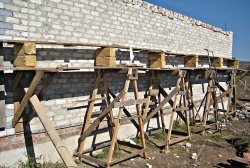 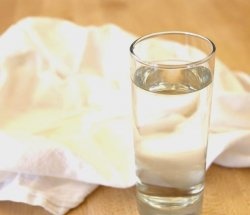 Getting distilled water at home 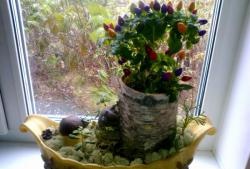 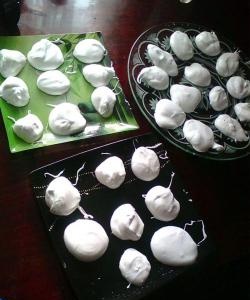 Getting fire from an empty lighter

About growing crystals at home

How to make mulled wine at home
Comments (1)