Tesla coil on a single transistor or Brovin kacher

April 4, 2011 Electronics / Tesla Transformer 289 080 61
I present to you a very small Tesla coil on a single transistor or a Brovin kacher. In the Tesla coil, a very high alternating voltage of a high frequency is supplied to the primary winding, and as the primary winding feeds the collector current of the transistor, it was Brovin who found out that with such a generator circuit, a high voltage appears on the collector and discovered a new way to control the transistor and called this device Kacher, which means a oscillator reactivity. The kacher is a high-frequency high-voltage generator, as a result of which the so-called corona discharge can be seen at the terminal. Also around it there is a rather strong electromagnetic field capable of influencing radios mobile phones especially touch and other electronics. Therefore, in the photo of the working quality, stripes are noticeable in close-up. It was these devices that Tesla tried to transmit energy to a distance, whether he managed to do this is unknown. Now there was no other use as a toy. So, let's get started, we need to consider the scheme, it is very simple and solders in 10 minutes. 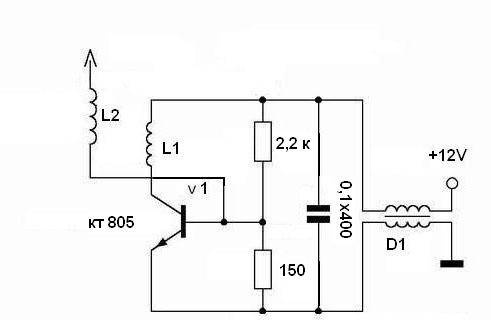 I redid it a little, instead of the inductor, a DC source of 12 V and electric. A capacitor with a capacity of at least 1000 microfarads, the more the better.
The transistor must be installed on a rather large radiator, otherwise it starts to warm up 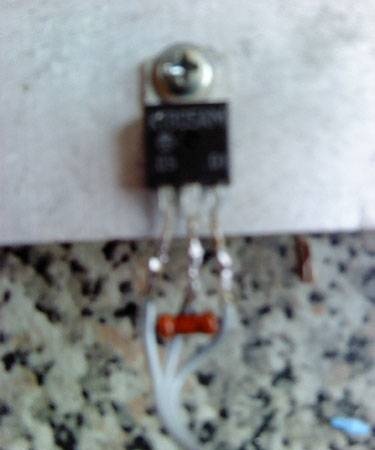 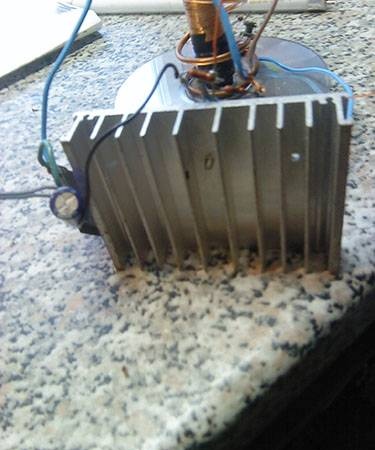 Then the most routine and tedious task is to be done, the L2 coil needs to be wound with a very thin wire of about 0.01 mm or a little thicker, but the finer it is, the greater the effect 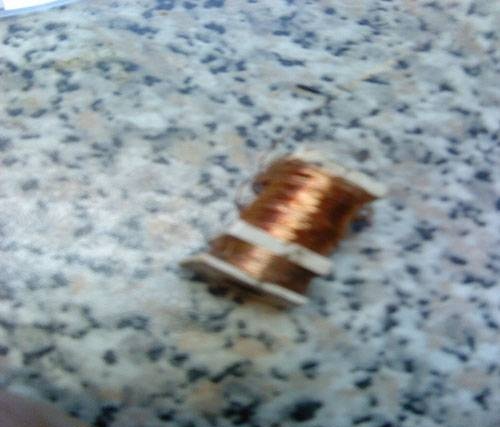 you need to wind it on a marker or something like that, but it must be a plastic cylinder, carefully turn it to a turn in one layer, if you wind around intermittently, coat with glue otherwise everything will go down the drain.
We stick a marker on a rack, a regular disk is great for this 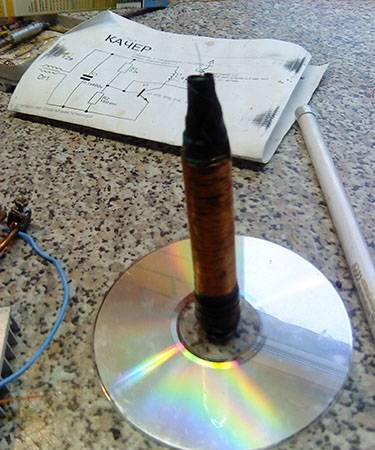 then we twist the primary winding L1 of 2-5 turns with a very wire of very large cross-section, of the order of 2-4 mm, for convenience it is better to take a skeleton diameter, which should be almost two times the marker 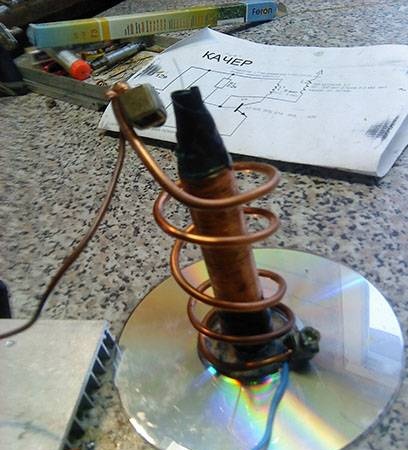 The lower tap from the marker, which goes to the base of the transistor, is better to put under the disk so that it does not touch the secondary winding. 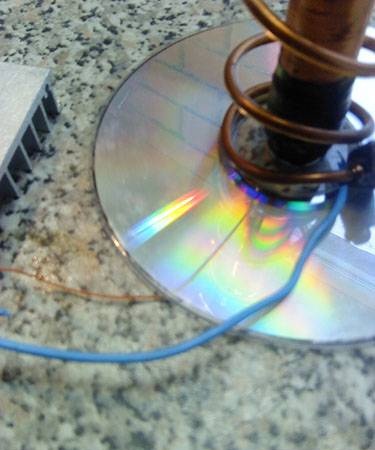 If everything is done correctly, then the circuit should work immediately, it is better to check with a fluorescent lamp, if there is no glow, swap the ends of the secondary winding (thick wire) or check if it touches the marker. 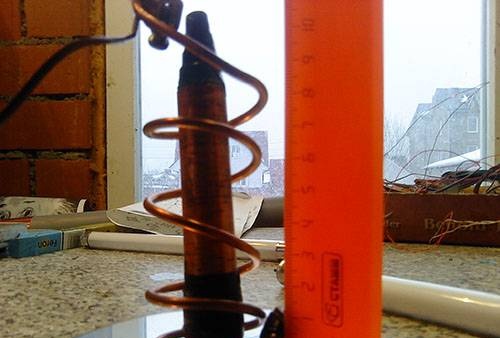 And so this is what can be done as a ready-made kacher
If you bring a discharge lamp to the quality, it starts to glow 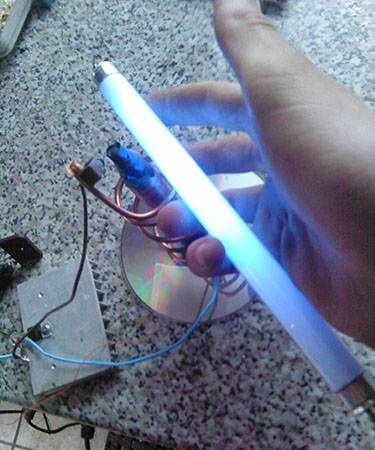 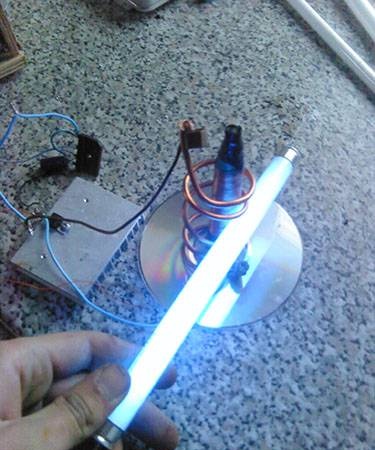 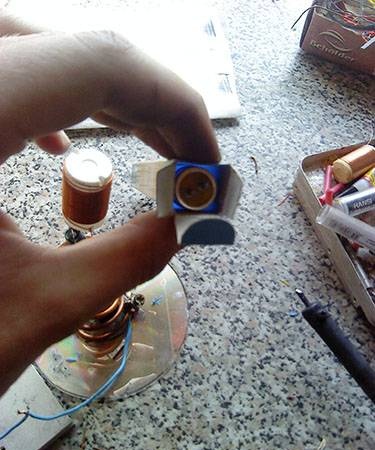 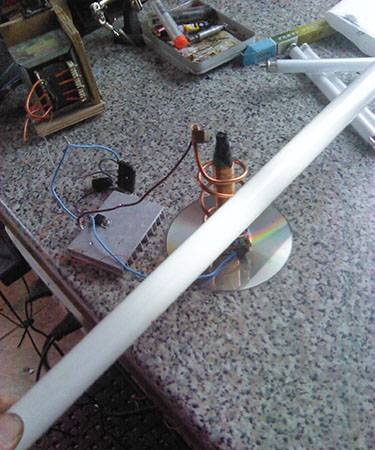 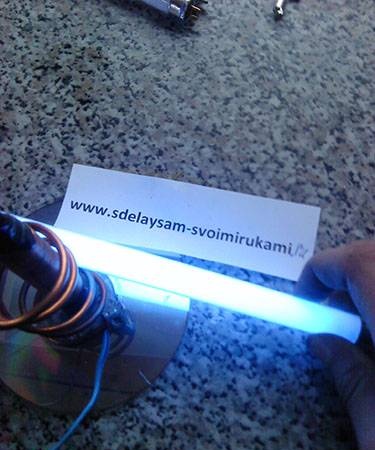 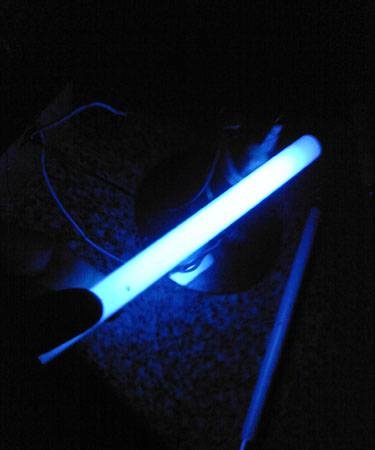 The same effect is observed with other similar lamps. 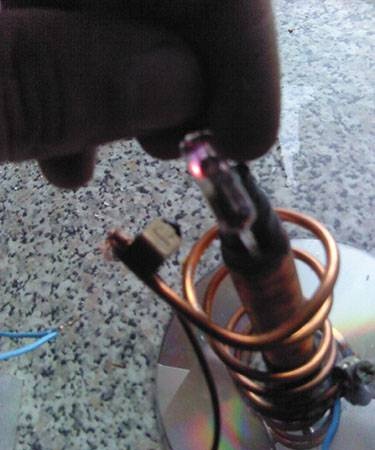 Also in a conventional incandescent lamp, you can see the so-called glow discharge that looks like a plasma ball looks very nice 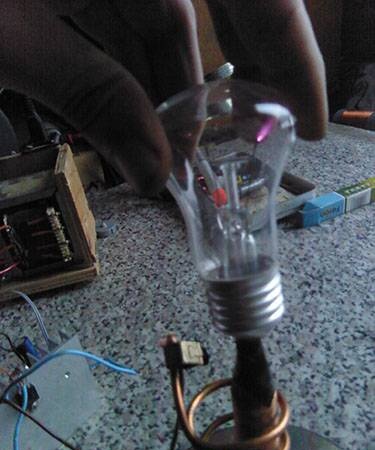 You can simply touch something with metal, the discharge is almost invisible, due to the size of the quality
If you make a large model, you can make an ion engine, but here it will not work 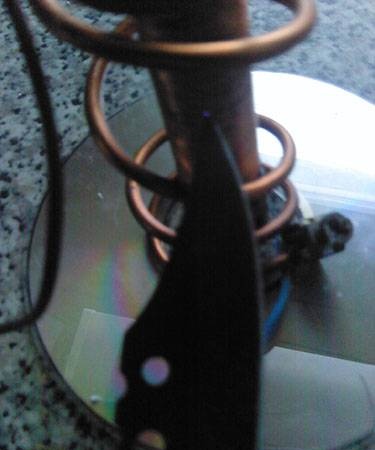 The result is a simple and fairly cheap toy
The most expensive were
1.Transistor 30 r
2. Radiator 20 r
The rest was already in stock, but I think everything in total will not cost 150 rubles.
AND THE MOST BASIC INFLUENCE ON THE HUMAN ORGANISM, Despite the size, it’s rather small, so that it’s not worth getting carried away, otherwise a mild headache may appear, and it does not look very good. A STRONG ELECTROMAGNETIC FIELD INFLUENCES THE NERVOUS SYSTEM.ALSO DO NOT TOUCH THE DISCHARGES HANDS BECAUSE OF HIGH FREQUENCY OF THE PAIN THE ABSOLUTE WILL NOT BE THE MAXIMUM, A LITTLE BURN WILL REMAIN, BUT HARM IS AS MUCH AS FROM THE USUAL CURRENT, IF NOT MUCH.
P.S. Video with a big model:
Wishing to repeat good luck!
Metal Video model A toy radio
come back 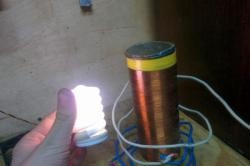 Kacher Brovina from a network of 220 volts

Silencer for the frequency of television and radio signals

Radio call and control devices at a distance